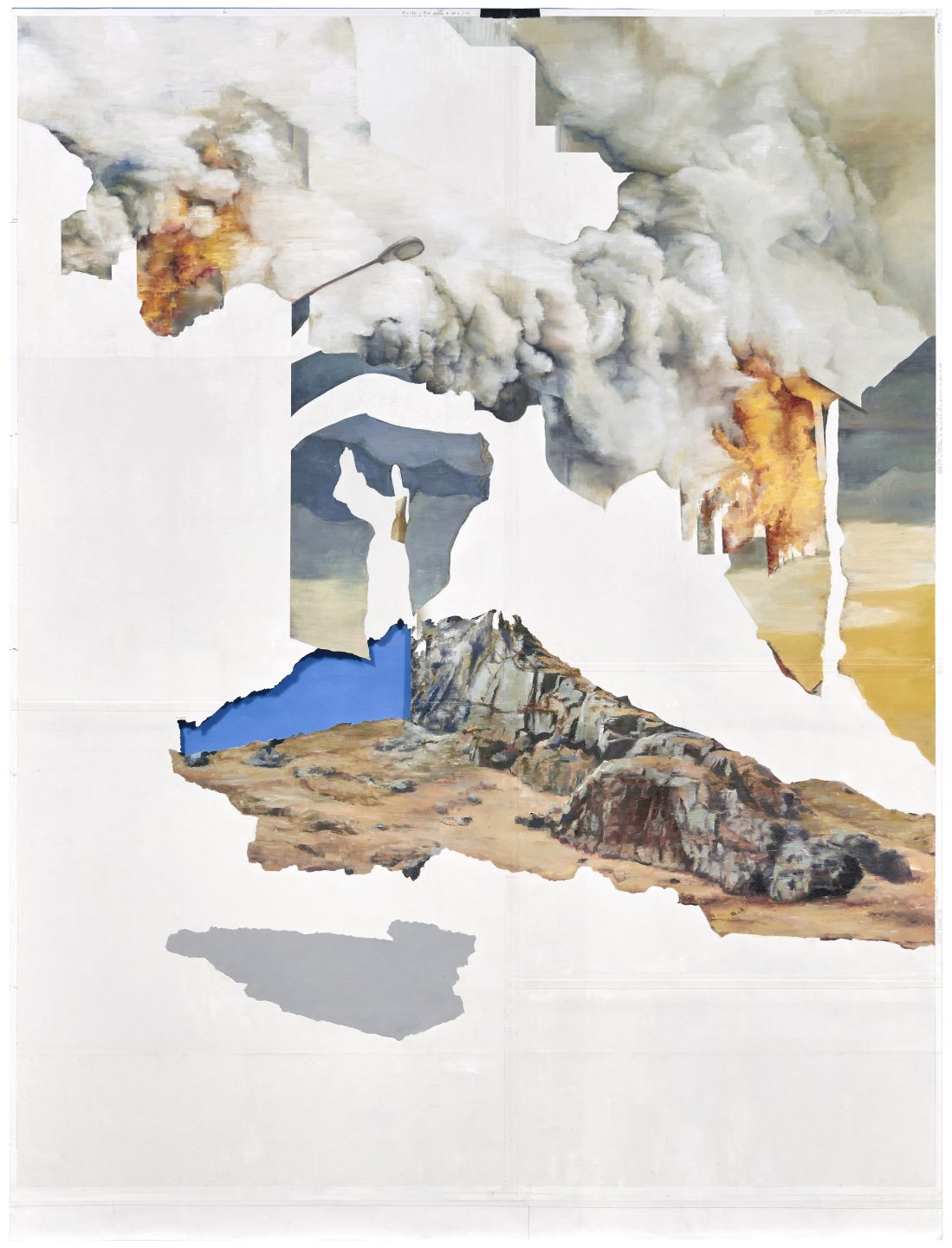 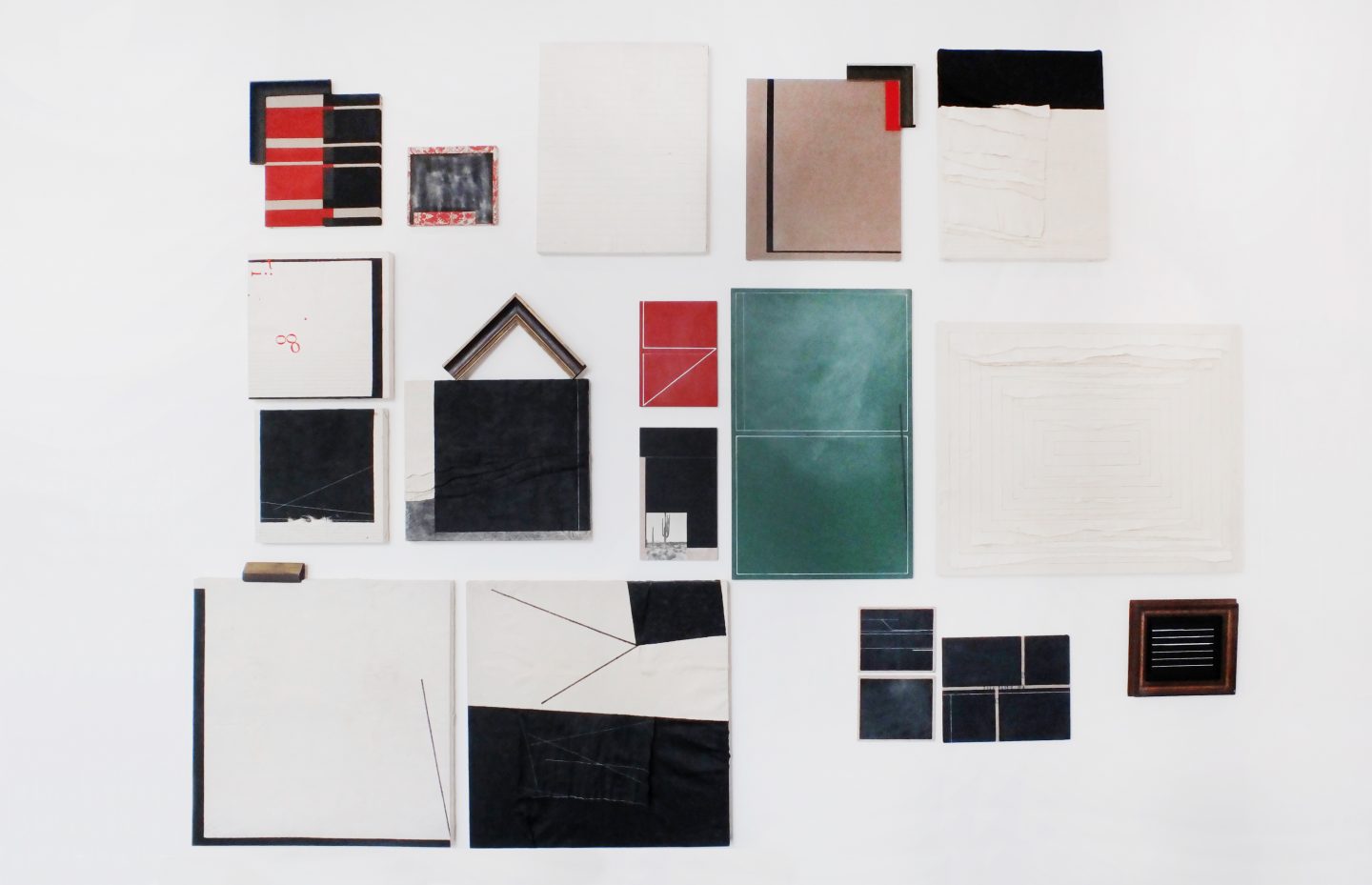 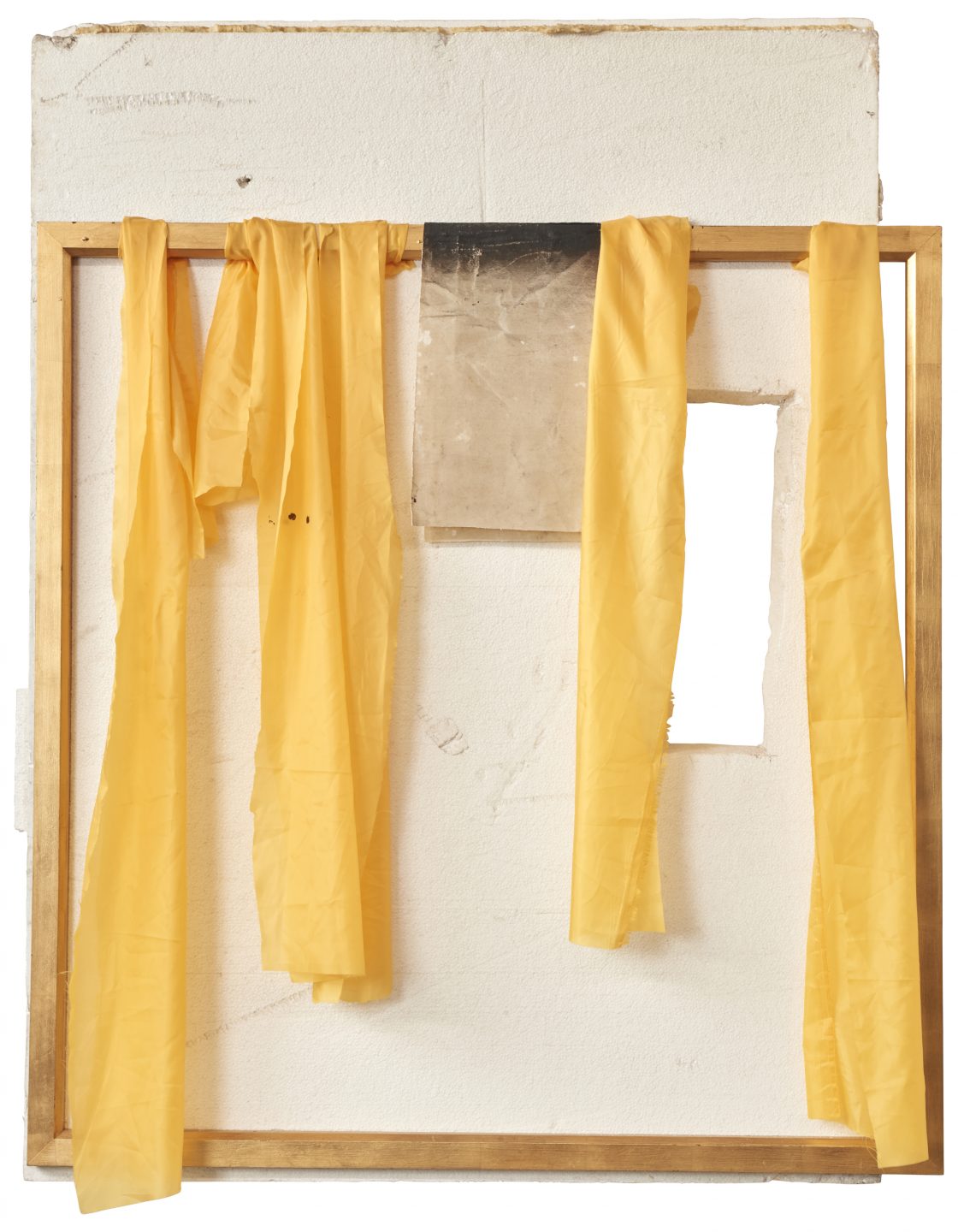 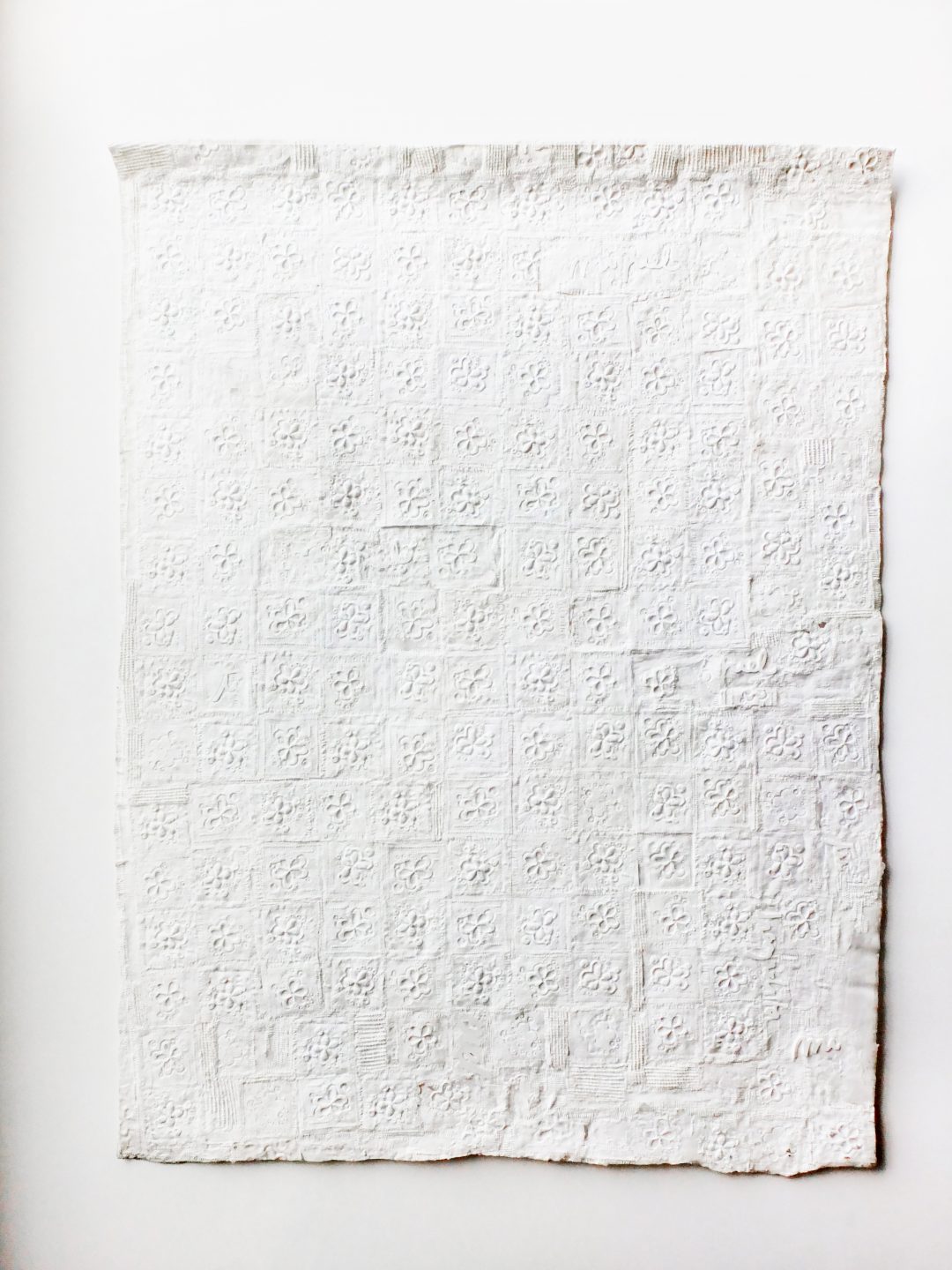 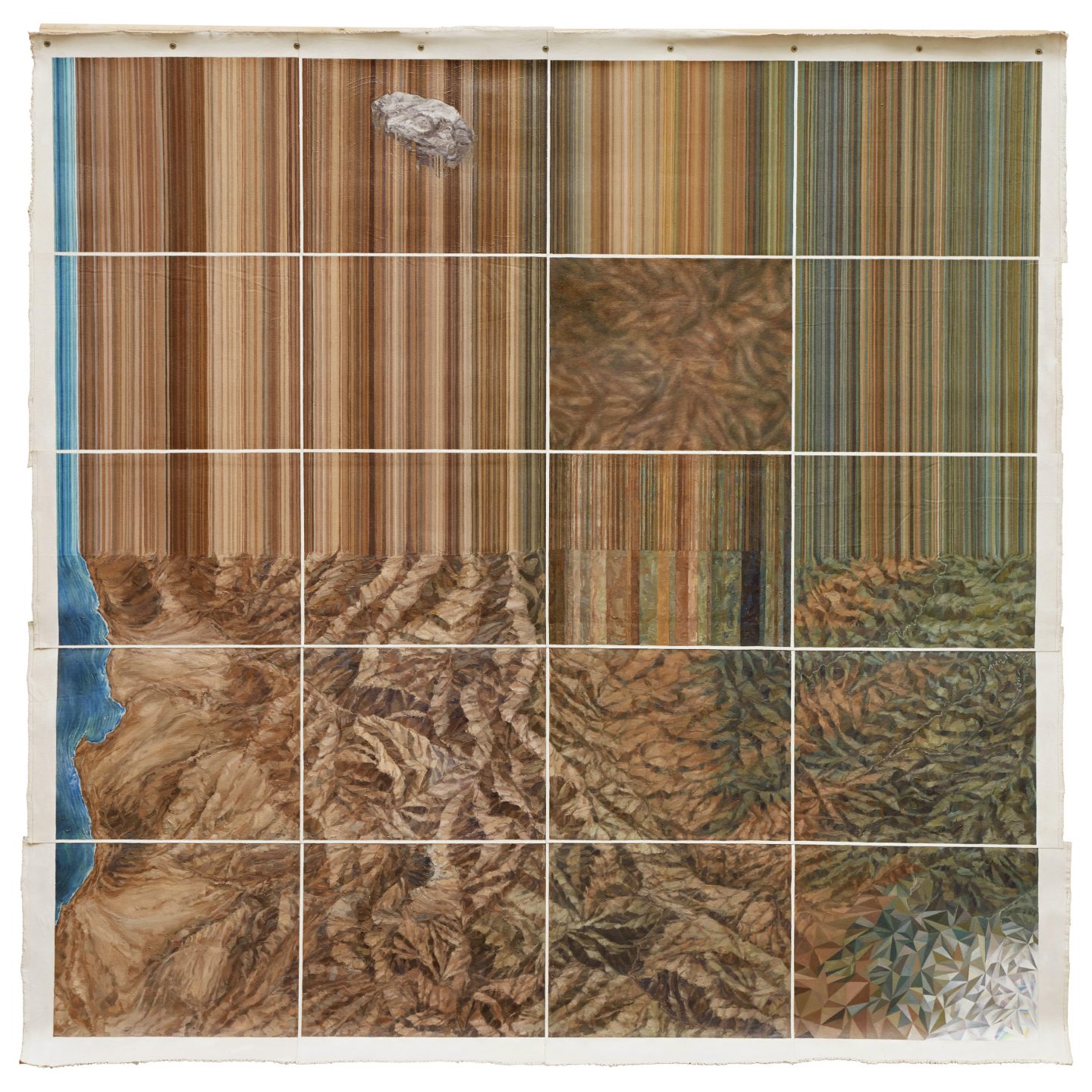 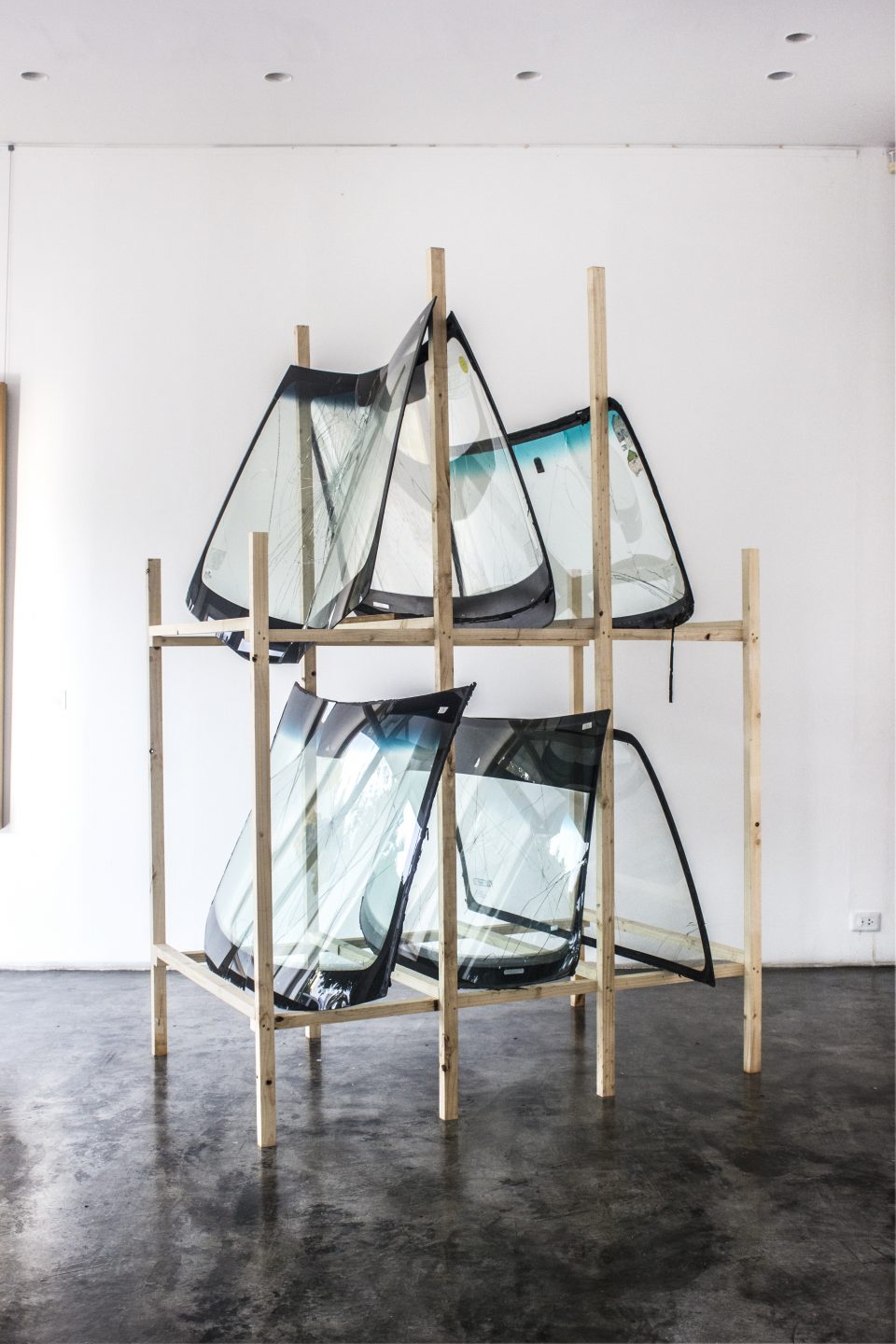 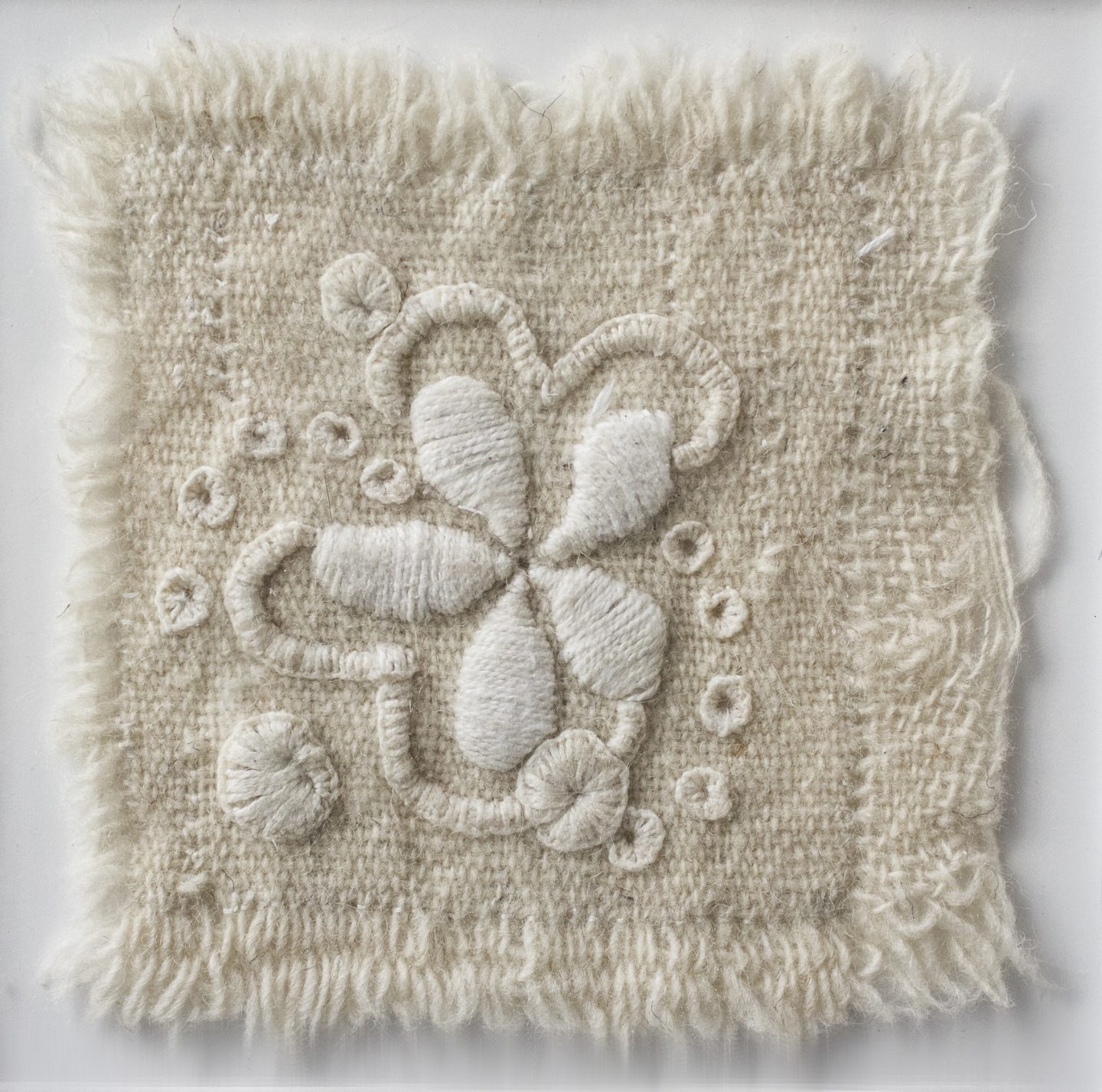 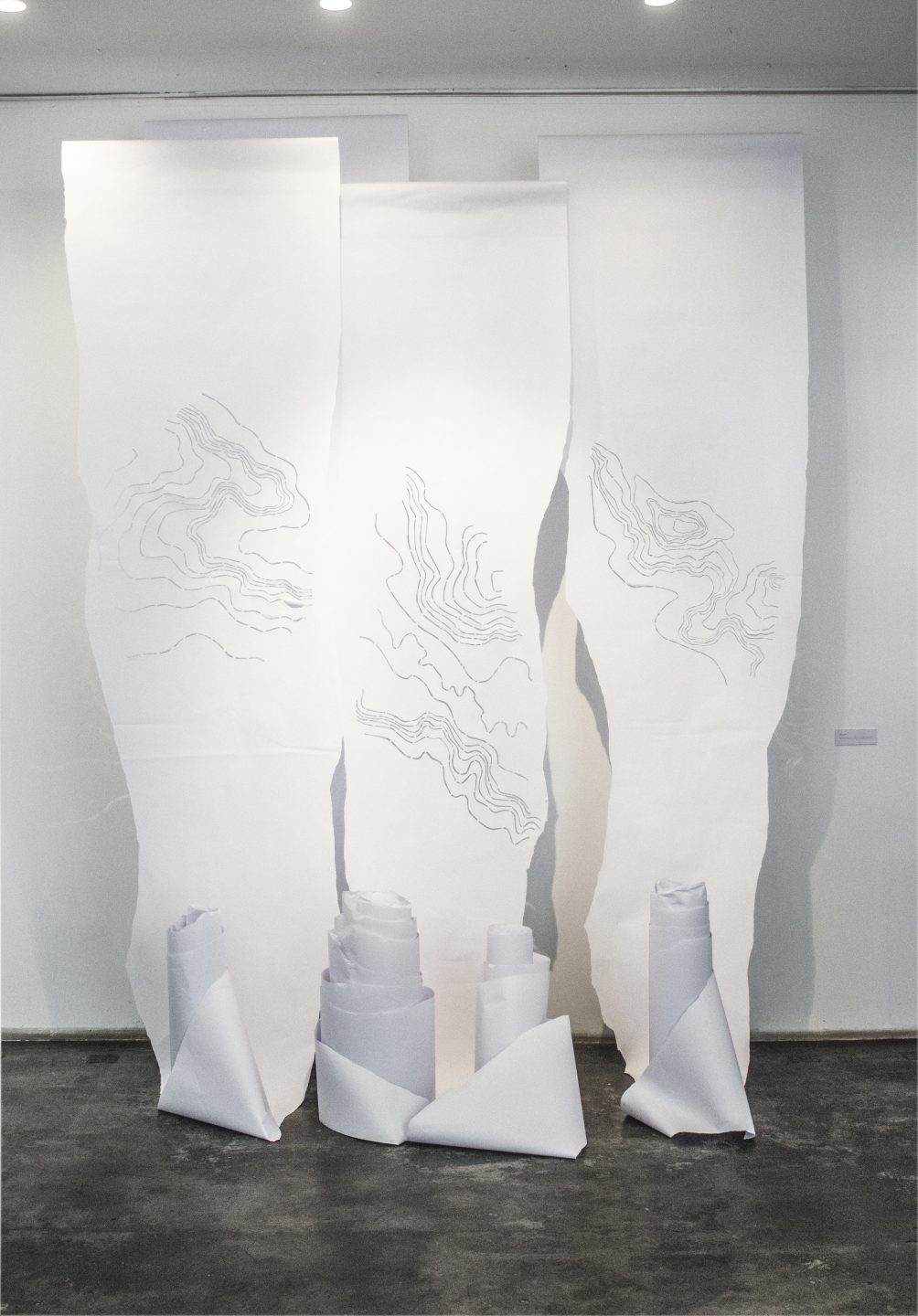 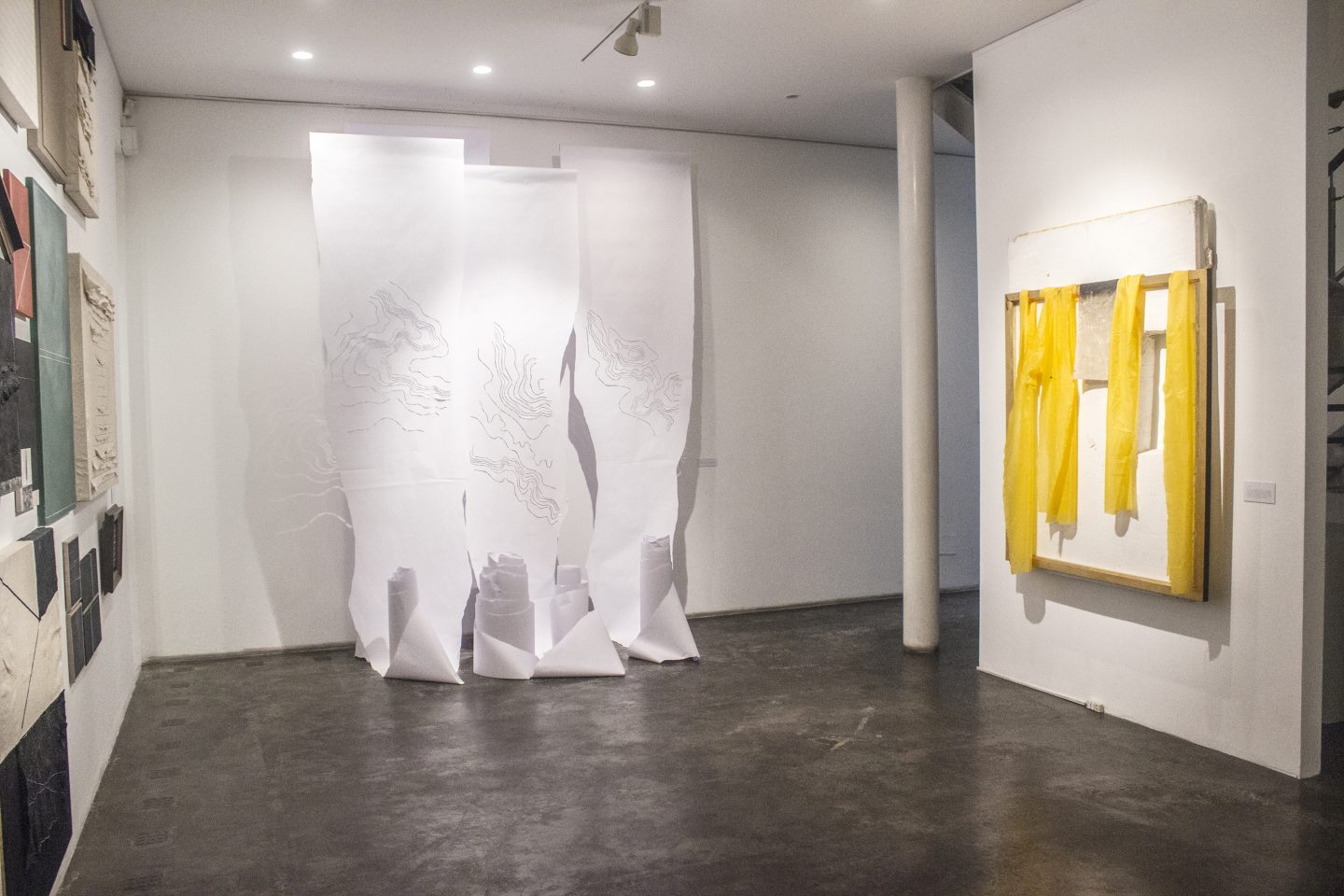 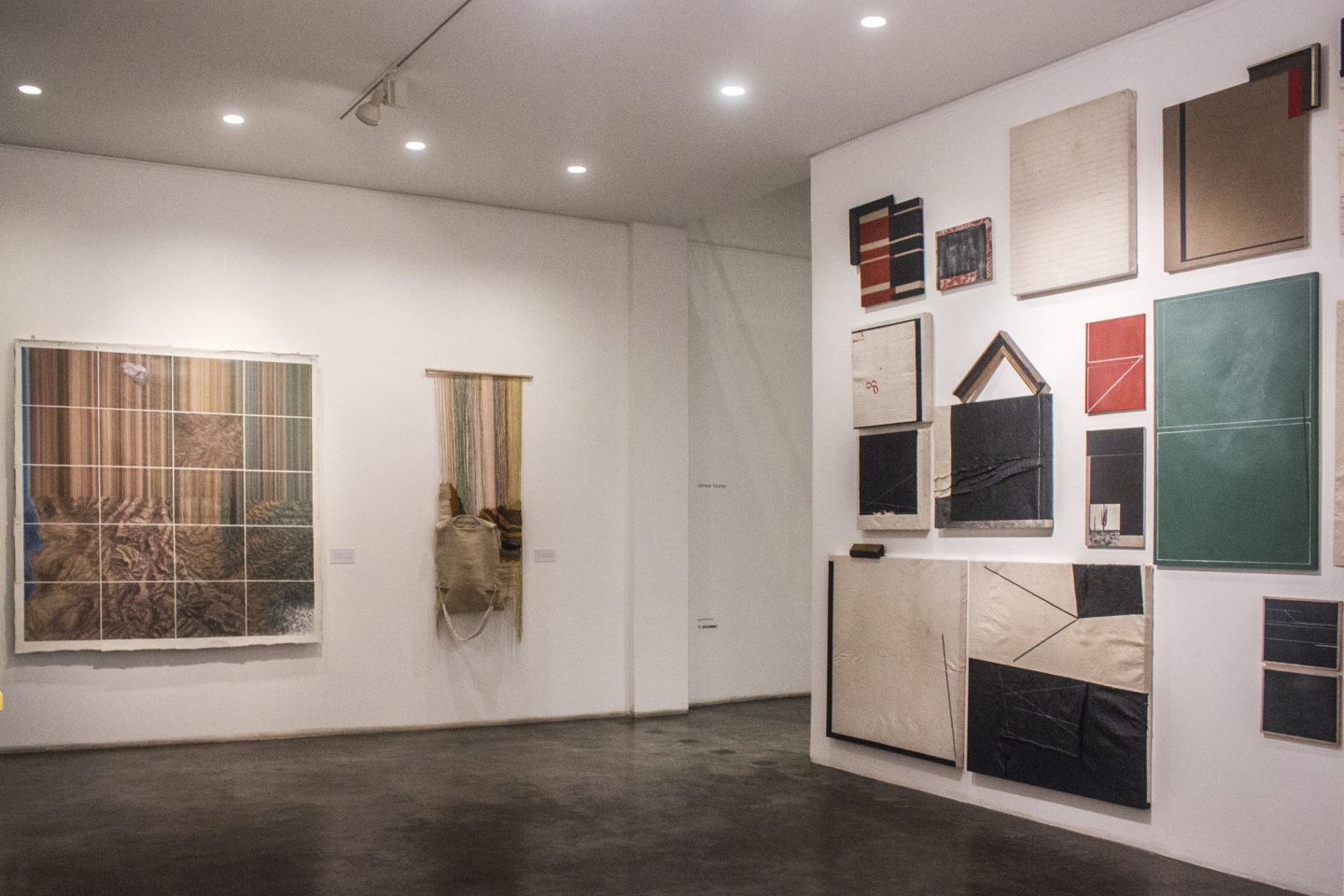 The cracking of an element is a sign of separation; a fissure that supposes a vestige of damage and that also becomes the irruption of the emptiness in the experience of perception of a body. Those lines -or hollow areas-, indistinct to the purpose that any object has had, are delimited from their degree of density and resistance; its shape, is thus configured from the materiality of each object. In the end, a void or all the voids speak of the same thing, they have a similar nature: that of the empty space, an absent image.

Concentric lines of an astral cartography, terrestrial cartographies and bordering spaces in dispute, the breakdown of historical documents. On the other hand, from seemingly heterogeneous points, the sense of abstraction, the mold of a personal object as a repository of memory, the fabric. A question is opened here to the spectator. In what way and for what purpose is the void used in each of these objects? It is about organizing the meaning of the present vacuum, organizing a set of null spaces, aligning the fissure of each object to understand the deliberate connections of each break.

This is a piece made in loom, with sheep wool and alpaca dyed with natural dyes. The artist proposes here to see the work in loom as an ecosystem, the body that made this piece is part of the fabric that goes in all directions, where we have the vegetables and minerals with which the thread was dyed, the alpaca and the sheep from which the fur was extracted, the water that cleaned them and the sun that dried them in the mountains where the animals were fed. By joining the piece through the dress, we approach all these processes
that are part of our environment.

Casari explores the possibilities where the painting is inverted or simply disappears: the traditional support of the fabric and frame is altered to give way to elements of industrial production thought as aesthetic objects from the observation of its most elementary qualities. Thus, line, plane and volume make up the image from the materiality of wood slats, painted fabric and some altered elements that have been collected and reused. Casari’s work demands a sensory and subjective approach; a full approach to materiality
and its symbolic potential.

This work explores the rift between Western education and the original or primitive state. Slate and ink, collage and oil on linen and yanchama fiber brought from the Amazon. Straight and sinuous, disparate lines coexist in order to challenge our perceptive sense.
The spirit, stripped of everything that is learned, is submerged in a deep rhythm that takes center stage, in a language that above all seeks universality.

Through an imaginary geography – that also raises a coast, mountains and jungle- North and South addresses the comprehensive view from the vigilant, and places a tension in the implications of the visibility of one and another territory. Thus, a totally mapped world is governed by the aesthetics of a digitalized nature, where the veils of information are extensions of a landscape in transformation. Can painting restore the Landscape aura of any represented territory? If so, their intentional syntheses (not data) are part of a nature to be represented.

The Inca ceques were a complex ritual / calendar system that consisted of 42 imaginary radial lines that started from the Coricancha towards 328 huacas or sacred places around the city of Cusco. These lines were closely related not only to geography and geometry, but also to astronomy and social groups (ayllus) in charge of pilgrimages. These new maps of ceques (cracks) are an adaptation of a
project that was presented at the Coricancha, in 2016, as a result of the tour of the city and the discovery, by the district of Wanchac, of a series of discarded windshields. The analogy, now from the context of Lima, to address the equilibrium relations between the geographic, astronomical, social, political and cultural that the Incas had and the enormous abyss that separates our modern idea of social relations – misaligned – with our environment.

This installation is part of the Colorless to White project, chosen by the CIFO Foundation in the Emerging Artist category and is the result of a research on the economic, geographical and political implications of the Salar de Uyuni in relation to the history of Bolivia and the various connotations of salt as material. The present proposal demonstrates a continuous interest in investigating the implications of the conflicts generated from the concept of property and the empowerment of the land in relation to specific historical contexts.

This work is the appropriation of a patch woven by my mother. Reproduction, alteration, molds in negative and positive; the fabric was transformed as a modular piece into a whole: a blanket or a skin as a metaphor for a genealogical memory: four generations of women from the same family.
It is memory as a burden that alters everything in its path, reconstructing episodes in its own way, crossing us and forcing us to tell a story from our versions, empty and inaccurate, and continuing.

These drawings are the contour lines of the topographic map of Iberia in Madre de Dios, one of the most deforested areas of Peru.

Through the reproduction of fragments of paintings by Bernardo Bitti -one of the first Jesuit painters to arrive in America at the beginning of the seventeenth century- the project aims to build a dislocated historical landscape; a scenario in collapse constructed from references to the internal armed conflict in Peru (1980s) and indications of catastrophes associated with informality and neoliberal economic growth in the last decade in Peru.